A lot of people were shopping on Sunday afternoon, some of them to take advantage 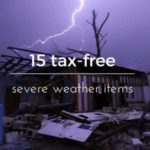 “I think a lot of people didn’t know about it,” she said. “So we are trying to let people who are in the store know about it.”

Lowe’s has many stores along the coast, she said. “Every storm season, we have an emergency preparedness. They put together teams that are ready to go to areas that have been storm impacted.”

“And we ship items that those areas need … to help their customers through those times,” she said.

Angela Murehead, a supervisor at Home Depot, said the store sold a couple of generators, but the hardware department hadn’t noticed any peaks in the listed items. A lot of times, contractors will stop by on their way to storm-damaged areas, she said.

Jaramie Wilson of Temple said he came to Home Depot on account of the sales tax holiday. He purchased a 3600-watt portable generator for $399. Store assistants Shawn Ogden and Gary Smith helped him load it on a cart.

Justin Owens, manager of Batteries Plus Bulbs, said the store had been selling items on the list for two days. The listed items BPB carries are single or multipack batteries, mobile telephone batteries and chargers, and solar flashlights.

“Only a few people have come in that actually knew about it,” he said of the tax holiday. “We try to save people some money. We already offer in-store deals, so saving the sales tax makes it even more of an incentive to buy more supplies.”

The store stays busy on weekends, he said. “We do a lot of device repair, phone repairs on the weekends.”